The science behind brewing beer is no secret but the art of charming the flavors from ingredients is what sets a beer apart. We work with chefs, bartenders, and restaurant owners to create flavors that are truly tailored to either complement or set off a dish or style. The concept of beer + food pairing is widely known, but giving restaurants the opportunity to work with a brewery at any time to create a unique beer is not conventional. We are happy to show you our process of making beer from grain to glass. 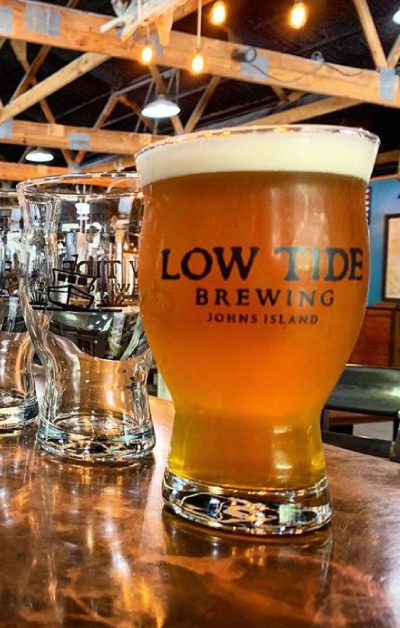 The name “Low Tide Brewing” was conceived while kayaking on the waters around Johns Island in 2012, but Mike’s dream of starting a brewery began long before that. Mike started home brewing in the basement of his fraternity house and always held on to the dream of opening up his own brewery. After a two-year stent in Australia, Mike decided it was time to make his dream into a reality. After finishing his business degree and while working for CB Craft Brewers in his native upstate New York, he headed back to settle in his favorite city and hit the ground running. Andy joined Low Tide in 2015 to continue the journey of opening Johns Island first brewery. Andy, a Colorado native, has worked with the folks at O’Dell’s and was the head brewer at Benson Brewing in Nebraska. Together, Mike and Andy dedicated themselves to not only creating delicious, unique Low Tide beers, but also crafting custom beers in collaboration with restaurants and bars in the low country. With a unique model and things moving forward, Low Tide opened its doors March 12, 2016.

This is where Low Tide beer is born - in our dreams. Something so delicious and refreshing could only of come from imaginative thinking.

We pick as many local ingredients as we can for our brewing process, hops, barley, and malts - and depending on the beer, a more creative flair is added.

Here's the complicated part... not to bore you with all the details but ingredients go in with a lot of science involved and under a watchful expert eye, the beer brews.

It's time for the fun part. Gather your friends and family together, because it's time to enjoy the fruits of our labor.